Northern Pike, the fish with an endless appetite and the cojones to attack anything that moves in the water. Whether it fits in their mouth or not, their eyes are sometimes bigger than their stomach. A voracious predator, Northern Pike are known to eat muskrats, ducklings, loon chicks, mice and any fish in the lake it thinks it can devour.

Pike range across much of North America and their cousin lives over in Europe. Like most species on the planet, quality of habitat dictates life for a Northern Pike. In the northern climate where Woman River Camp & Outposts is located, Northern Pike are the top predator in the food chain.

Northern Pike spawn right after ice out. Some believe they spawn under the ice. That I don’t know but I have watched them spawn in the flood grasses beside the dock while the rest of the lake is still covered in ice. Pike start spawning when water temperatures reach 4.4C (40F) and ends when it reaches 11.1C (52F). Peaking at 8.9C (48F). Spawning occurs over flooded areas that dry up later in the year and most activity occurs in the afternoon. Females lay approximately 32,000 eggs per pound of fish. Eggs take about 10 days to hatch and the fry stay in shallow water for several weeks eating tiny water flees and other small aquatic organisms. Fry are targeted by larger insects, minnows, pan fish and cannibalism is very common with Pike. A 1 ¼” fish will eat a 1” fish! With good forage, Pike will grow to be 12 inches long in their first year of life. After the initial growth spurt, Pike, typically add at least a pound of weight a year. Pike reach sexual maturity at 2-3 years old. Most fish will return to the same area year after year to spawn.

Northern Pike use their excellent vision, keen hearing and great sense of smell to track down and attack their prey. Fishermen at Woman River Camp & Outposts are constantly talking about the monster Northern Pike that came out of the depths and attacked the Walleye they were reeling in. On a number of occasions, the Pike is oblivious of the boat and the anglers net both fish with no hooks even in the Pike! This just shows how the big fish are actually pretty lazy and wait for the right opportunity to come along. 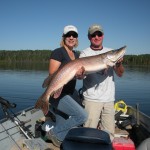 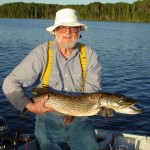 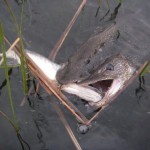 Tackling Northern Pike by the Seasons

After spawning Pike disperse with the little males moving well away from the big females. The trophy class Northern Pike move to areas where bait is plentiful. Dark bottom bays and shallow bays in the northwest corner of lakes receive the most sunlight and warm the fastest attracting baitfish. Another great spot is river mouths where Suckers go to spawn. Two prime areas where you will hook into trophy Northern Pike.

Use a medium to medium heavy action rod with a reel loaded with 10-20lbs test. My favourite is a 7ft medium action rod with a fast tip and a baitcasting reel spooled with 14lbs test monofilament line. I attach a 6ft piece of 40-80lbs test fluorocarbon leader with a Blood Knot. I then tie my lures directly to the leader material. 6ft will typically last me an afternoon of Pike fishing. Big fish are hungry but lethargic so use baits that work at slow to no speed. Suspension lures like Rapala Husky Jerks, Smithwick Rogues and Cotton Cordell Ripplin Redfins are go to baits. Slowly retrieving spoons like the Doctor spoon, red/white Daredevil and my favourite blue/silver hammered Little Cleo works amazingly well too. Fish lures 3-6 inches in length. Don’t forget to have a few Rapala Xraps in your arsenal. Go to colours are blue/silver, clown, black/silver, and orange. Work the shallow bays being careful not to spook the fish. Most often those aren’t logs down there they are fish!

One of the simplest and effective ways to catch trophy class Northern Pike in the spring! Especially for shore fisherman who spend time fishing “sucker creeks”. Pick yourself up a few large slip bobbers, stoppers and a package of cheap 3/0 snelled hooks. Use an open face reel on a 6-9 ft medium action rod spooled with 8-12lbs superline. The longer the rod, the further the out you can cast. Rig up your slip bobber and then tie a snap swivel on the tag end. Now attach one of your snelled hooks. It is beneficial to know how deep it is out from the creekmouth you intend to fish. Not a big deal if you don’t. Make an educated guess and set the bobber stop. Put a piece of cut bait on your hook and flail it out there. If the bobber lays on its side, reel back in and move the bobber stop to shorten the distance between it and the bait. Throw it back out and keep adjusting until the bobber sits up properly. Watch the bobber and when it goes under wait a second and then set the hook. If you accidentally deep hook the fish, just cut the line and attach a new snelled hook. The best cut bait is any legal bait that is oily and stinks. Wear rubber boots or hip waders to give you the opportunity to move along the shoreline.

As spring turns to summer and the water warms up, trophy class Northern Pike need to move deeper to stay in water with temperatures in the 10-15C (50-60F). Big fish need to live in cold water. They can come into warmer water to feed but will become stressed and eventually die if forced to stay in warm waters. Look for trophy fish setting up at ambush spots in rivers with deep pockets. Look for “hooks” on your fish finder around points, drop-offs and mid lake structure. When the weeds start to grow fish will be lurking in or on the outer edges. Fishing becomes a little tougher because lots of Pike now move out to the depths and chase Cisco, Lake Herring, Whitefish and Trout. Cover more water to find the bigger fish.

Start throwing larger baits in the 6-10” size range around the areas where there are few weeds or above emerging weeds. Jerkbaits and big spoons work well. Use sucker, walleye and silver colours. Use spinnerbaits, weedless spoons and swimbaits in and around the weed beds. Look for cabbage growing in water 10-20ft. Sparser the cabbage, the stealthier you need to be and slow the presentation down. In thicker weedbeds, the Pike will ambush just about anything they see or hear go by. Don’t forget to try some topwater baits over weedbeds and all sorts of structure. Pike eyes are on top of their head and big baits twitching on the surface overtop 20ft depths are easy pickings.

Troll in-line spinners just beyond the prop wash over top of weedbeds zigzagging as you go. Troll deeper water with deep diving crankbaits and heavy spoons. Cliff ledges, mid-lake humps and through schools of deep baitfish are all key big fish summer spots.

It makes you wonder why a Pike is eating your little jig and minnow when you look down in their mouth and there is the tail of a Walleye in their mouth and the rest working into their stomach. Yet they take the time to eat your jig. Opportunistic! A close easy meal presented itself. Casting and jigging big jigs around points drop-offs and humps will put you bait in front of big fish. Use your electronics to locate lone hooks and target those specific fish with big plastic swim baits. Impregnated flavours along with the right colours slowly worked over these locations will hook you Pike. 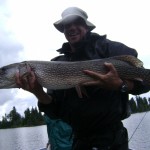 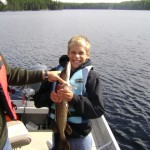 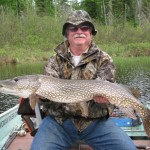 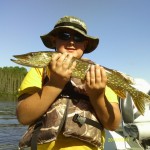 Concentrate on finding green weeds and avoid areas where the weeds are dying. Green weeds mean life and oxygen whereas dead weeds suck the oxygen out of the water.

Feeding is a major autumn pike activity. Rocky humps, shoals, and points are spawning locations for pelagic bait fish. Monster pike suspend off such spots to intercept the movement of spawning ciscoes.

Casting, Trolling and Jigging will all work around these areas.

Ice fishing Pike is a time for patience. Drill patterns off of points starting shallow and working out to about 20ft. Another great area is shallow bays, right where we fish for Walleye. Use a 10” auger if available and space your holes out at least 10 m apart. On your way to the lake, stop at the grocery store and purchase a few packages of herring. Use tip-ups spooled with Dacron line and either a single red treble hook or a quick-strike rig with your dead bait. Usually the bait will sink to the bottom on its own but if it doesn’t, stuff a penny in its mouth. Sit back cook lunch and wait for a strike. I like to use a battery powered alarm on my tip-ups along with the flag. Let the fun begin! After you catch one monster, keep on fishing the same area. They don’t nickname them Waterwolf for nothing. The big fish will run in at least twos and packs up to four. Best time is late morning and all afternoon before the walleye bite starts. 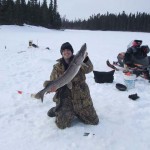 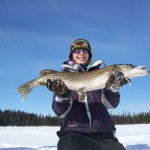 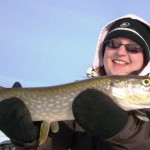 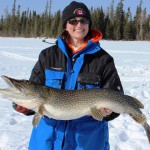 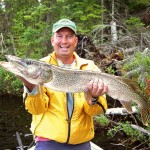 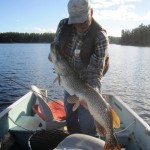 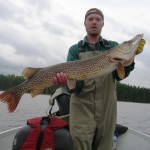 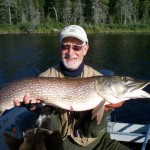