Ice Fishing in Canada – a couple days with Paul & Debbie

Back home from the All Canada Shows and with most of the paperwork caught up, Debbie and I decided to head up to camp for a couple days of ice fishing in Canada at Woman River Camp.

Of course winter decided to show up just before we left Dryden. Temperatures were predicted to be around -14C (7F) during the day and -24C (-11F) at night. Not bad but the wind was suppose to be bluster between 20-30 km/h (12-19mph). Holy buckets a brisk windchill.  Not typical of ice fishing in Canada 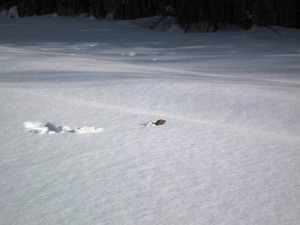 A Grouse staying warm in the snow

Unable to leave Dryden until Wednesday afternoon, we decided to spend the night with friends in Ear Falls. A nice meal, good conversation, and a great hockey game on the tube made for a relaxing evening. the next morning, we grabbed some bait and headed to Woman River Camp. The South Bay Road is always in amazing shape in the winter.  We spotted three Grouse on the trip. It wasn’t long and we had the sleds unloaded from the trailer.  I gave Debbie the honours of busting trail into camp. I soon followed after loading the boggan with our supplies. There was about two feet of snow on the ground and very grain like.  Which was nice for shoveling off the deck.

When I got to the cabin, Debbie already had a fire blazing, heating up the cabin. It takes about 8 hours to really warm up the walls.  With the gear unloaded and Debbie tending the fire, I headed back out to the road to turn the truck and trailer around and check the gear before heading out to a lake. Debbie had lunch ready when I got back to the cabin. After a quick bite, we changed into dry clothes and headed back to the truck. Ready for some ice fishing.  Timber loves the running in and out of camp!

We trailer the sleds about 10km back down South Bay road to the trail leading to  “The Stomach”. Some days we will sled from camp but due

to timing and Timber tagging along, it is faster taking the truck.  The sled ride takes about 15 minutes.   Lots of moose and wolf tracks crisscrossing the trail. Timber managed to keep up for a kilometer then I stopped and loaded him in my lap. Upon arriving at the lake, I pull out the Jiffy Auger and I punch a bunch of holes. Debbie helps set up the hut and propane heater and I get her settled in and fishing.  I continue to set up the tip ups and before I am done, she is yelling fish on! 4:05pm. We sure got a late jump on the day. For the next hour and a half, the action was fast and furious. At the end of the day it was Debbie 7, Paul 6. Debbie also had the biggest Walleye in at 22″.  She didn’t catch any Walleye under 18″ and only two of mine were small enough to keep. 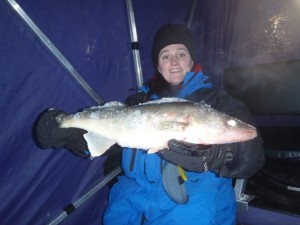 can see the disappointment on her face on Facebook.  It was a cool day but the steady action kept you warm!

Back at the cabin, we had dinner and headed to bed early.  Friday morning the thermometer read -24C and the top of the trees were blowing.  Debbie has an itch to join the 40″ plus ice fishing club.  She came close last year.  We decided to head back to “The Stomach”.  It is actually a bellowed out part of the Trout River and looks like a stomach on a map.  We made it on the lake by 12:30 today.  Set up and of course Debbie is catching before I have the tipups set.  The action was a little slower but consistent.  I decided to use dead Ciscos under one tipup (the siren) and live bait on the other (tinker bell).  Debbie was quite content to fish her line in the hut and I stayed busy managing the other lines.  The Siren, when the tipup goes off, a siren starts blaring indicating a hit.  Great for when the tipup is not visible from your fishing location.  Well they sure liked the Ciscos.  I managed a 30 plus Northern Pike on that line.  I didn’t measure any fish unless in the hut.  With the windchill, it was best for the fish to put them back in the water as quickly as possible.

My last fish of the day was another 30 plus Northern Pike.  I managed to catch it on my new rod and reel.  A medium action rod with a fly reel spooled with 6lbs test.  Yes a fly reel.  When we participated in the St.Paul Ice Fishing Show, last December, I was on the hunt for some level wind ice fishing reels.  I was tired of open face reels with poor drags and their tough reeling in cold weather.  Well Frabill  had a beautiful little fly reel combo.  The only problem was the rod was an ultra light for panfish.  To my surprise, Debbie gave me a fly reel for Christmas and the rest is history.  No worries about a little water freezing things up.  When you leave it in the rod holder to attend to a tipup, the clicker announces a hit and lets the drag out.  Of course I noticed a couple of drawbacks.  Most importantly, you need to hold the reel when setting the hook as your hand is the reel drag.  Since there is no bail, you must pull the line off the reel by hand.  So it is not designed for fishing Lake Trout in 60ft of water.  It is my new favourite reel for fishing anything in depths up to 20ft. 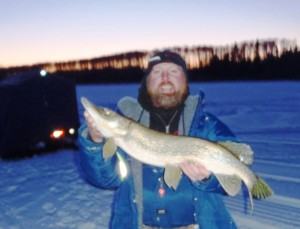 Final score for the day was Debbie 11 (she finally started coming out of the warm hut to grab a few tipups) I ended up with 10 fish.  We saved a total of 5 Walleye and a Northern Pike for a family fish fry with Valerie-Ann back in Dryden.  Timber decided to stay in the warm cabin the second day and greeted us with a wagging tail upon our return.

Our goal for day two was big Northern Pike.  Two in the thirties made it a success.    Due to the Pike being more active, the Walleye were a

little more scarce.  Less jigging and more pausing seemed to work best for the Walleye.  Water depth was between 5 and 8 feet and that includes the 30 inches of ice.

While finding links for this blog, I found a new lure I would love to try.  I will have to search it out in the states when we head down for the All Canada Show in Minneapolis this upcoming weekend.  I’m sure this lure will reduce bite offs and give a  little more freedom to the minnow.  I will divulge the secret bait once I surpass Debbie in our numbers competition! 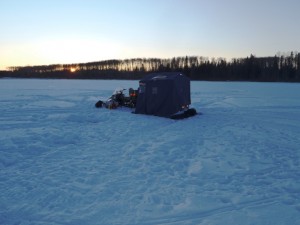 The whole lake to ourselves!

Overall, we had a great relaxing trip ice fishing in Canada!  With the above average temperatures throughout most of the midwest U.S.A., we

know most of you will not see ice this winter.  If you have the time and want to experience some great ice fishing in Canada, give us a call 1-866-347-4972.  We will put a package together for you!

Ice Fishing in Canada is Incredible! 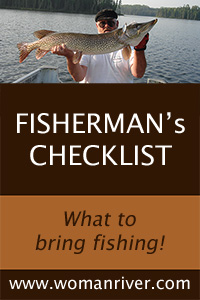